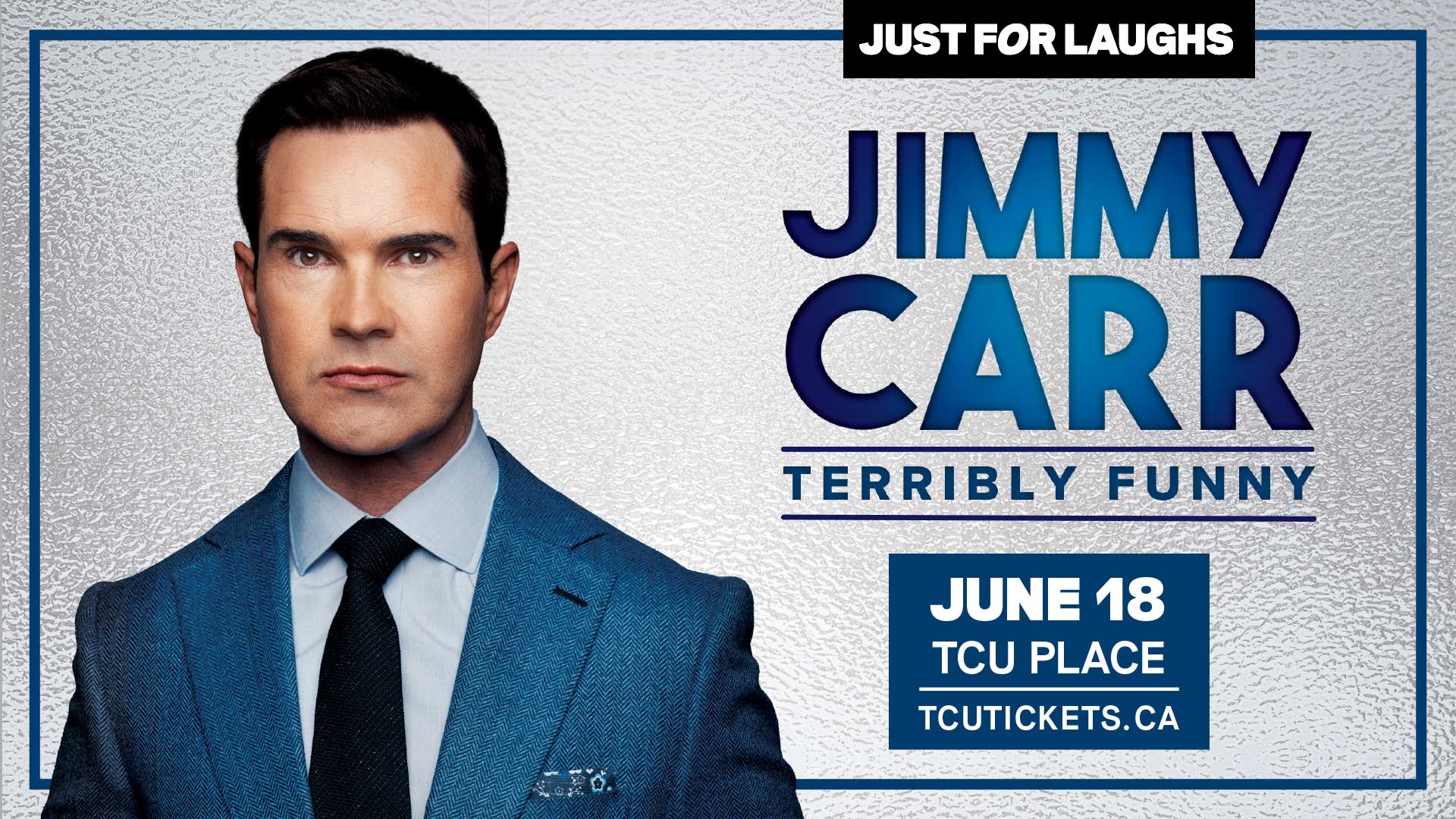 Just For Laughs is thrilled to present the return of UK comedy superstar Jimmy Carr to Canada with his new show Jimmy Carr: Terribly Funny. A household name in UK television and star of the UK’s most streamed Netflix comedy special of 2021, His Dark Material, Jimmy will be in Saskatoon, SK on June 18, 2023 at TCU Place as part of his national Terribly Funny tour.

Jimmy’s show contains jokes about all kinds of terrible things. Terrible things that might have affected you or people you know and love. But they’re just jokes - they are not the terrible things. Having political correctness at a comedy show is like having health and safety at a rodeo. Now you’ve been warned, buy a ticket.

One of the biggest-selling comedy acts in the world, Jimmy consistently performs stand-up to sell-out crowds across the globe. At the latest count he has taken tour shows over forty different countries, including two sold-out tours in Canada in 2016 and 2018. His last tour, Best Of Ultimate Gold Greatest Hits, sold over 480,000 tickets globally with current show, Terribly Funny, set to exceed that figure by the end of 2022. In 2023 the tour continues in to 2023 with shows in Australia, New Zealand, Canada and beyond.

Jimmy is a household name in UK television, well known for hosting Channel 4’s 8 Out Of 10 Cats, 8 Out Of 10 Cats Does Countdown and Big Fat Quiz Of The Year in addition to presenting Comedy Central’s Roast Battle UK and Your Face Or Mine. He is a regular on all the top panel shows, including QI and A League Of Their Own, has performed as part of The Royal Variety Performance three times, is a judge on hit BBC1 entertainment series I Can See Your Voice and the host of brand-new Channel 4 gameshow I Literally Just Told You.

Jimmy is also a high-profile name in North America. He was the first UK comedian to sign a stand-up deal with streaming behemoth Netflix in 2015, releasing three specials on the platform, Funny Business (2016) and Best Of Ultimate Gold Greatest Hits (2017) and His Dark Material (2021) which was Netflix’s most watched stand-up comedy special in the UK that year. He also presented and exec-produced an original panel show format for Netflix, The Fix, and has been a guest multiple times on US staples such The Tonight Show, The Late, Late Show and Late Night With Conan O’Brien. He has performed at the Montreal Just For Laughs Comedy Festival since 2003 with more appearances than any other UK act in that time.

Jimmy is also a published author. He co-wrote The Naked Jape: Uncovering the Hidden World of Jokes in 2007 and his highly anticipated memoir Before & Laughter was released in September 2021, making The Sunday Times Bestsellers list.