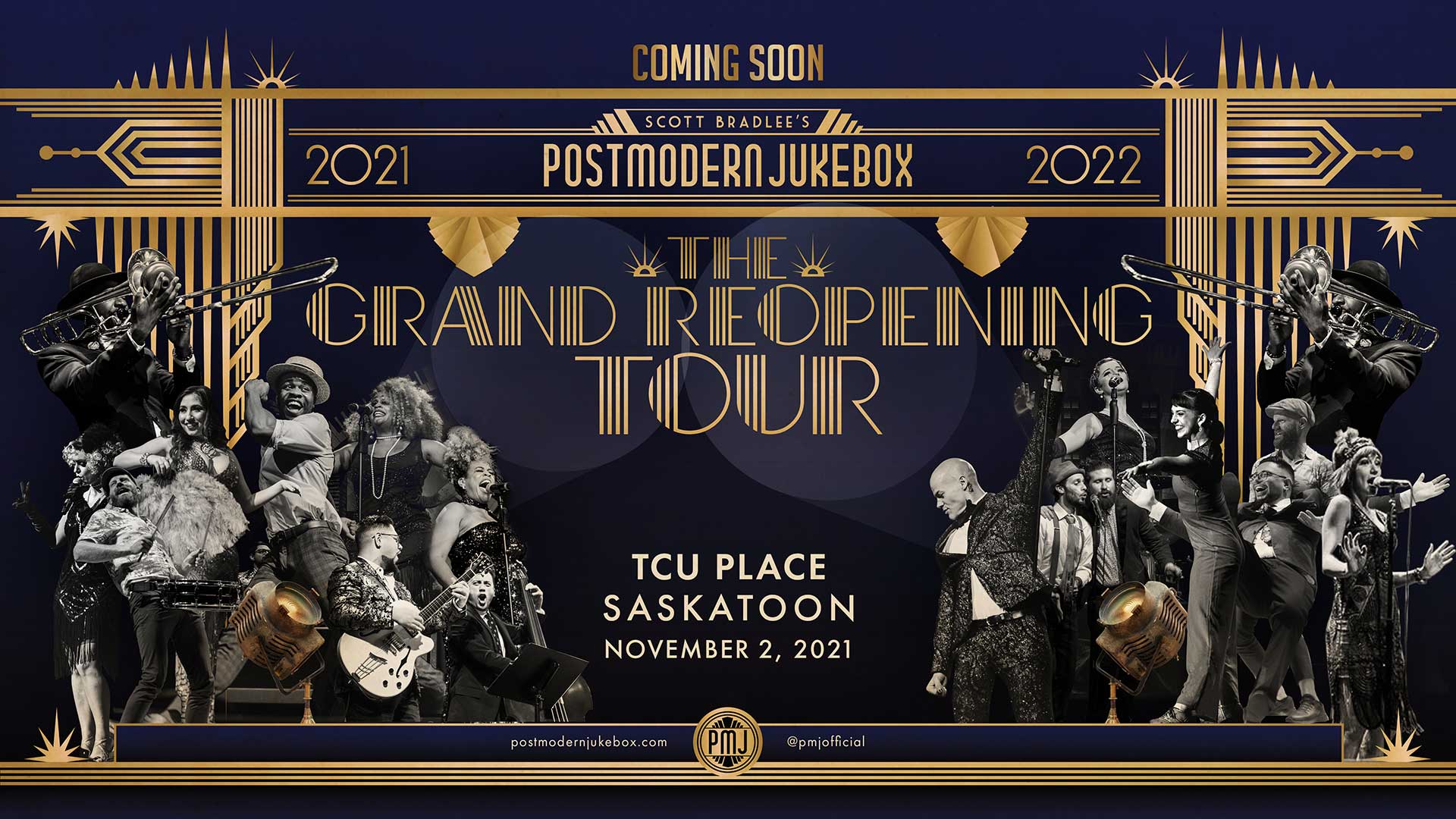 The pop-jazz phenomenon makes its long-awaited return to live performance with a celebration of the new Roaring 20s traveling across the U.S., Canada, U.K. and Europe

Early last year, pop-jazz phenomenon Postmodern Jukebox set out to celebrate a new-millennium Roaring 20s, promising audiences across the country and around the world “the most sensational ’20s party this side of The Great Gatsby.”

Well, we all know what happened next. Just seven dates into the Welcome to the Twenties 2.0 Tour, PMJ creator Scott Bradlee pulled the tour off the road and made the decision to postpone the remaining dates — many of them sold out — as a global pandemic took its toll, silencing live music for more than a year.

This fall, the wait is finally over and Postmodern Jukebox, the time-twisting musical collective known for putting “pop music in a time machine,” are set to make the ‘20s roar again! Kicking off in September, The Grand Reopening Tour will bring PMJ back to thrill music-starved audiences in the U.S., Canada, the U.K., Australia, New Zealand and Europe, performing some of modern music’s biggest hits in the classic styles of bygone eras.

“I’m grateful to be able to create and collaborate with so many talented people, and playing live to a theater full of music fans is something that we’ve all really missed,” says Bradlee. “We’re fortunate to have so many incredible fans worldwide that have enabled PMJ to become a global touring act, and we’re looking forward to bringing outstanding talent and classic sounds to every corner of the globe once more. It's a Grand Reopening, but it's also a Grand Reunion – not just for our talented cast and crew, but also for PMJ and fans of classic, ‘Old School’ entertainment.”

As always with PMJ’s dazzling live shows, The Grand Reopening Tour will feature an ensemble of multi-talented singers and musicians bringing Bradlee’s generation-spanning arrangements alive night after night. The core ensemble is often joined by surprise guests to make each concert unique and unpredictable – making for one of the most thrilling live music experiences of this and any other time period. MusicInsight.com put it quite simply in the Before Times: “Go see Postmodern Jukebox. Stop whatever you’re doing, right now, and go see them!"

Over the past decade, Postmodern Jukebox has grown from a viral phenomenon into a worldwide juggernaut, amassing more than five million subscribers on their YouTube channel, growing from Bradlee’s tiny apartment in Astoria, Queens, to a Los Angeles studio befitting the bandleader’s increasingly ambitious vision. Most recently, PMJ reimagined the beloved theme from Friends via the evolution of music styles throughout the 20th century – beginning in the Hot Jazz 1920s and climaxing in the 90s with a guest appearance by original “I’ll Be There For You” performers, The Rembrandts.

Since embarking on a touring career in 2014, PMJ has performed on bigger and bigger stages as they’ve traversed the globe, including memorable shows at Radio City Music Hall in New York City. As the Houston Press proclaimed, “Scott Bradlee’s project has turned into a worldwide phenomenon in quite a small amount of time, having sold out shows in more than 60 countries around the world – and rightly so.”

For a band so deeply rooted in Jazz Age aesthetics – though their time warps have touched on virtually every major trend in popular music, from doo-wop to Motown to hair metal – the coming of another twenties was obviously a symbolic milestone. Ironically, the original Roaring 20s was itself ushered in by a worldwide flu pandemic.

“It's crazy how history repeats itself,” Bradlee says, “and it’s striking that people back then reported the same feelings – everybody was beyond tired of being cooped up by themselves after weathering a long pandemic. They just wanted to get out there and dance and party and see each other again. Music has served such a valuable function of inspiring us and reminding us of our shared humanity throughout history, and there's simply no substitute for gathering together to experience such a powerful force live.”

For questions regarding the VIP packages, please reach out to info@future-beat.com. VIP merchandise will be distributed at the show.