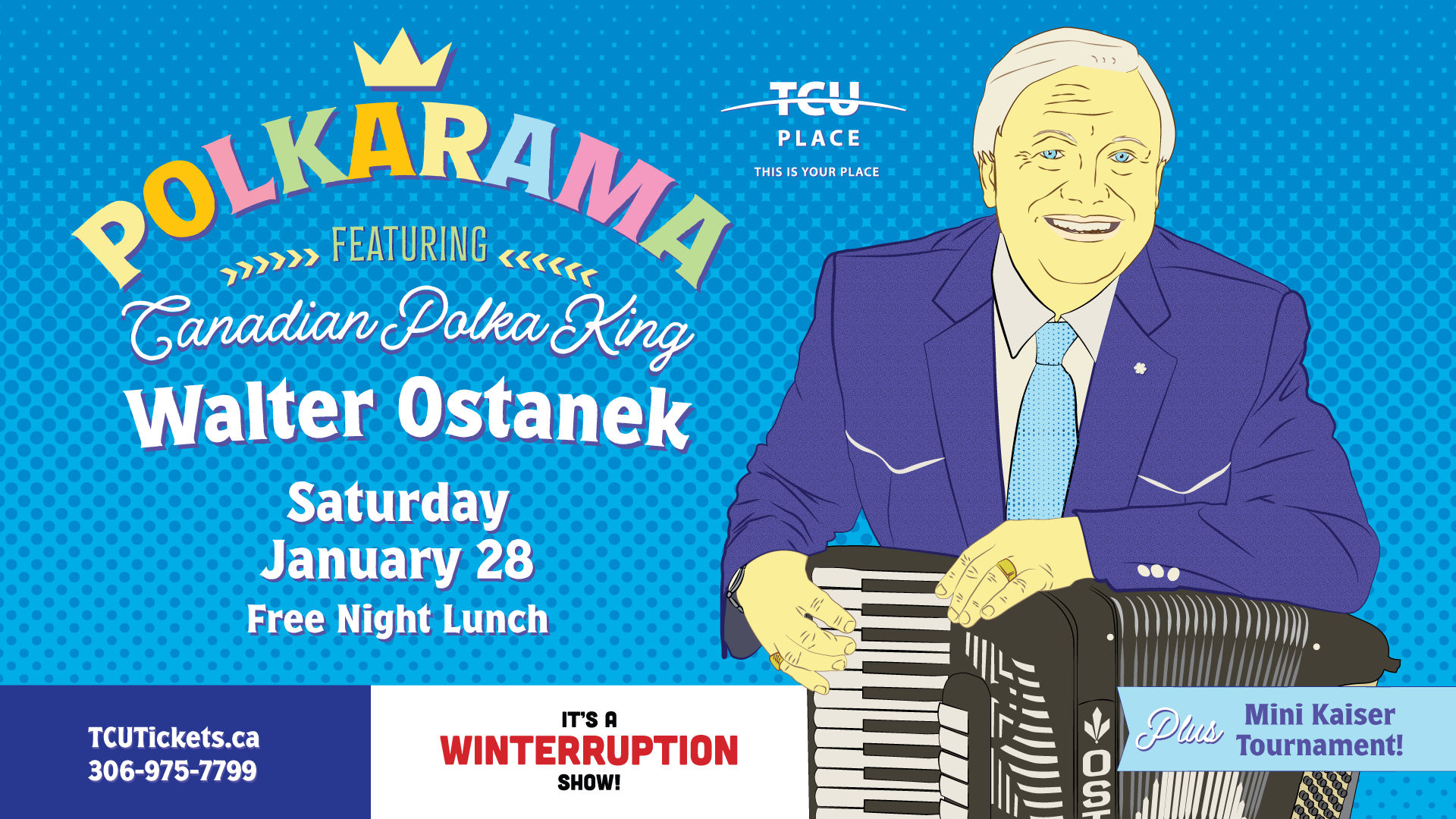 Dance away your winter blahs! TCU Place partners with Winterruption 2023 to present PolkaRama! Polka the night away with 3-time Grammy Award winner and Canadian polka legend Walter Ostanek, enjoy a free night lunch to keep your energy up, and have fun in our Mini Kaiser Tournament.

The story of “Canadaʼs Polka King”, Walter Ostanek begins in the small town of Duparquet, Quebec, where he was born Ladislav John Ostanek on April 20, 1935, of Slovenian heritage (decent). When he was four, Walterʼs family moved to the St.Catharines, Ontario area and by the age of nine, Walter began playing the button diatonic accordion. At age 12, he received his first piano accordion, and only four years later, in 1951, he broadened his horizons and formed his own group, his first Country Western/Polka Band. Two years later, he had joined with Abbie Andrews and the Canadian Ranch Boys, and was an instrumental part of their radio show, (three programs a week).

At age 21, Walter felt he was ready to proceed further on his own, and on Saturday, January 26, 1957, his new band played its first engagement at the German Village in Niagara Falls, Ontario the day had finally come after 13 years of study, hard work, and determination. Walterʼs dream had come true – the Walter Ostanek Band was now a reality.

The next milepost in Walterʼs life bears the date February 22, 1857, when he and his bride, Irene, exchanged their vows in marriage. With their two children, they now reside in St.Catharines, Ontario, Canada. In his leisure time, Walter favours a quiet evening at home, where he immerses himself in his favourite music, including Polkas and Country. Some of his favorite artists are; Americaʼs Polka King, Frankie Yankovic, and Country artists, Ray Price, George Strait, Randy Travis, Charlie Pride, George Jones, Alan Jackson, and Clint Black, to name a few. Some other favourite pastimes are collecting Polka and Country LPʼs and CDʼs, collecting autographs, and photography, video, and DVD recordings.

Other than working with the band, Walter owns “Walter Ostanek Music Centre Ltd.” at 41 Geneva Street in St.Catharines, Ontario, Canada.

To Walter, the title “Canadaʼs Polka King” is much more than just a name. It is a special honour that carries with it an obligation to a special dedication and a promise to his fans and followers that wherever and whenever the Walter Ostanek Band appears in public, the band will do their utmost to please the audience and keep them happy. Walter has given 53 years of dedication to his family, band, and in particular, to the promotion of Polka Music. At home his mailbox is shaped like an accordion. His bandʼs truck license plate is “OSTANEK”, and his cars are: “POLKA”, “POLKA1”, “POLKA2”, “WALTZ”, “4POLKA”, and “1- WJO-1”.

Walter works very hard at his craft and he expects, moreover, he demands that his fellow musicians do likewise…and when performing on stage, the result is a happy blend of enthusiasm and mutual respect. His obvious love of good music is combined with talent to create a winning combination that has earned Walter Ostanek the title, “Canadaʼs Polka King”…and has earned the band a devoted audience.